Cost optimization. What is the smart savings in commercial real estate

Each company in the course of its work is faced with the need to optimize costs. The difficult economic situation, the rising cost of energy, an increase in the wage bill and many more factors affecting the cost of a product or service lead to difficulties and reduced competitiveness. And if it is extremely difficult or impossible to reduce expenses in some articles, it is possible to optimize the operation of the property and this will lead to substantial savings. 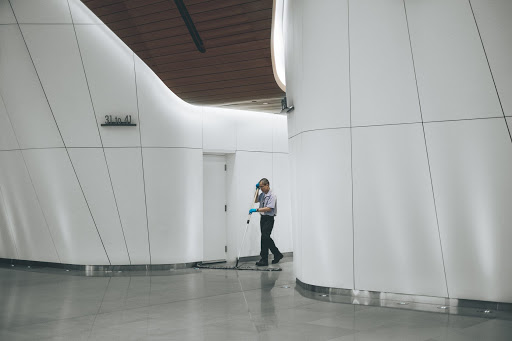 Massively reduce the costs of operating buildings in developed countries began in the late 80s and early 90s of the last century. At some point, traditional methods, such as facade insulation, timely MOT, system and equipment upgrades to less energy-intensive, have exhausted themselves, the savings have reached their maximum. And this was the impetus for the development of new “smart” technologies.

Energy costs account for about 30% of the total cost of operating a commercial building. Let’s take a closer look at what takes so much energy. 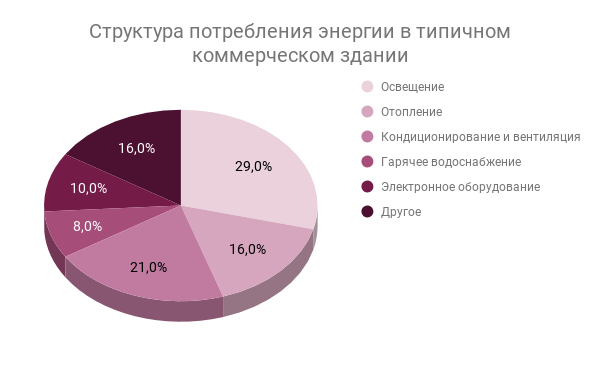 As can be seen from the above diagram, the lighting is the most energy-intensive system of the building. If LED lighting in a building is already installed, how else can costs be reduced?

Sensors and sensors play a key role here. The situation when the whole building lights up the light, and half the premises are not used constantly, quite a frequent phenomenon. Installing motion sensors allows you to turn on and off the light, depending on whether people are in the room or not. Such technologies are most effective in business centers and office buildings and significantly reduce energy consumption.

Another method to optimize the cost of lighting is the installation of brightness control systems. For example, during the daytime there is no need for bright artificial light, and sometimes sunlight is enough. Smart systems are designed to adjust the brightness while maintaining it at a certain standard level.

The next major expense is air conditioning and ventilation. Proper balancing of equipment is very important here, with particular attention to chillers and pumps. It should be noted that the change in temperature during conditioning by 1 degree changes the energy costs by 10-15%. There is something to think about. And if we take into account that temperature, humidity, air quality are the main factors affecting the productivity and comfort of people in the room, then it is crucial to use all available technologies to create balance. Here again, sensors and sensors come to the rescue, and the ability to turn off air conditioning in individual rooms.

Thus, if there are no people in a certain room of a building, then the system can be turned off so that it does not run idle. It is also worth considering that for different people a comfortable temperature will be different. Someone is comfortable at 25 degrees, and someone is 22 hot. In addition, if there are 5 people in the room, then the capacity of the system can be one, and if there are 15 people in the same room, then the equipment should work differently. Therefore, the ability to adjust the temperature, the intensity of ventilation in different rooms separately is a huge plus for any building.

Automatic blinds can also come to the aid of the ventilation and air conditioning system. A relatively new technology that monitors the temperature in the room with the help of sensors, and if the sun heats the room too much – the blinds are closed, which reduces the load on the cooling equipment, and vice versa, if the room requires heating, then the blinds automatically open.

Water supply. Sensors on taps for dosed supply of water will not surprise anyone. And indeed, it is a very effective way to significantly reduce the cost of water. In countries where the climate permits, rainwater harvesting technologies are also applied and then used for the needs of the property. Such systems have not yet received widespread use, due to the impossibility of predicting the amount of precipitation, and the relative high cost of self-purification of water before being supplied to the water supply system.

Above we talked about the individual elements of smart building management systems. Implementing them separately already gives a significant economic effect, and in difficult economic conditions, for many it is the only option. However, an integrated approach to “smart” building management leads to much more important benefits.

Thanks to the development of technology, in particular the Internet of Things, as well as significant progress in computer software, the integration of all processes inside the building into a single system controlled from one place has become a reality.

Collecting data from all sensors, sensors, measuring devices, meters, as well as information about the number of people in a building, external climatic conditions, allows real-time adjustment of all processes, responding to the needs of people and equipment in a timely manner in accordance with the goals of resource optimization.

Such systems can reduce not only energy costs, but also other items of expenditure. For example, if you know that there are 100 people in an office building today, then the cafeteria serving the building needs to cook a certain amount of meals, thus the expired food becomes less. If there are more people in the building today than usual, it is worth increasing the load on cleaners to avoid dirt and dust in rooms, etc.

In conclusion, we note that in existing buildings it is worthwhile to take a comprehensive approach to the implementation of “smart” technologies for saving resources and to develop modernization stages with the calculation of the expected effect, in order to determine the most important elements for replacement. During the construction of new buildings, it is still at the design stage to think about the efficiency of building operation and the possibilities of modern technologies.